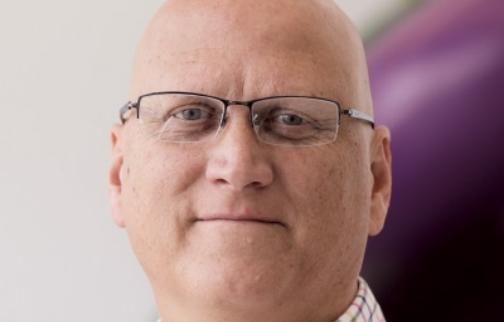 Who would play you in the biopic about your life?

I have a very weird response for this one. I chose Robin Williams, just his method of comedy it kind of mirrors my life—chaotic, frantic but still having fun. In marketing, it’s never slow … you’re handling and juggling a lot of balls.

What’s your favorite franchise brand that’s not your own?

One I really like and always have is Dunkin’ Brands. Nigel [Travis] and the team over there … the brands are ones I respect in a very competitive industry. They’re also very committed to innovation; they’re always on the leading edge. You don’t see them get complacent. I see myself watching and monitoring them even from outside the restaurant industry.

What are you freakishly bad at (or good at)?

I’ll start with the good. I’m freakishly good at Sudoku puzzles. I could challenge just about anyone in a Sudoku square off. It’s my passion for math and I’ve always loved puzzles and brain teasers. I’m too competitive to be bad at anything. I went ax-throwing once and didn’t do well but now I’ve actually gotten pretty good.

What did you want to be when you grew up?

I wanted to be a pediatrician from the time I was in sixth grade. I’ve always loved being around kids and I was really good at math and science. But I ran into the buzz saw that is organic chemistry. In college my fraternity brothers at the University of Kansas talked me into walking on to the junior varsity basketball team … that kind of pulled my focus.

What’s something not many people know about you?

I don’t like to use the basketball one, but I got the call from Coach Larry Brown to come up off junior varsity. (Brad was a member of the Kansas Jayhawks NCAA basketball champion team in 1988.) I was the skinny kid on the end of the bench. The longest I played was 59 seconds. Something else, though, is the reason I was on that team is I had a 42-inch vertical leap—I had no problem dunking. I’ve shattered two backboards in my life.

What’s something you would seriously stockpile if you found out it wasn’t going to be sold anymore?

I love to play golf. I feel guilty about it because it’s time away from my family, but I’m trying to get my youngest to start playing. I’ve made the trip to Scotland with my dad and I’ve played a lot of PGA courses.

If you could dis-invent one thing, what would it be?

Email. I say that jokingly but it’s an unbelievable time-waster. It has just overwhelmed us with so much extra work. The number of times I get emails from people in my office when they could just get up and talk to me … I do like it for the ability to keep in touch though.

What superhero power would you most like to have?

I would like to be able to stop time to gain time for myself. If I had the power I’d stop time and have just me time.

What’s the best piece of advice you’ve ever been given?

One is advice my father gave me: To always be patient and always think before you react. I like to assess and think before I have an immediate reaction. The other is advice a research partner gave me: To remind myself that I am not the customer. My opinion doesn’t matter nearly as much as I think it does.

With whom would you most like to spend a day?

Warren Buffett or Steve Jobs. Buffett because I’ve always wanted to pick the brain of someone who’s not only a smart financial person but also just to know what he thinks about during a normal day. And Steve Jobs from an innovation standpoint. How do you think outside the box and keep going down a path even though other people don’t think it’s the right one.

By The TLE Team
Don't miss our CEO and ...
Read Full Post

By The TLE Team
Richard Weissman, Co-founder, Chairman and CEO of The Learning Experience, has been selected to lead the Board of Directors for Make-A-Wish® Southern Florida. He will work with the board and Make-A-Wish team to fulfill the nonprofit’s mission of granting life-changing wishes to critically-ill children. His new role as board chair was effective January 2020 and will initially run through the organization’s 2020-2021 fiscal year.
Read Full Post

By Nikki Batiste, CBS News
Five-year-old Riley Chicino's tiny classroom chair has been empty since she was diagnosed with leukemia last summer. Riley's mother, Kaylie Manger, said the hospital stays and chemotherapy treatments have been a test of strength for her feisty daughter.
Read Full Post

School Teaches Youngsters to Give the Gift of Kindness

By Gregg Krupa, The Detroit News
Two buses loaded with teachers, pupils, several parents and Christmas gifts rolled up to the La Casa Crisis shelter in Howell, and the preschool children from the Learning Experience school in South Lyon bounded off, happy and excited.
Read Full Post
X
×